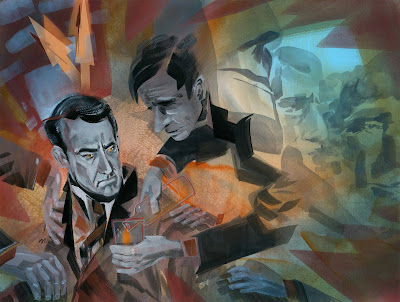 God, I wish I could pull off wearing a fedora any day of the week. The tall kind, the kind the “professor” wears.

And yeah, yeah, yeah, there’s nothing more “American” than Mount Rushmore. Maybe. I’ll go with Jazz, and bourbon. And you should, too.

So, the 20 year Pappy Van Winkle, switched to Noah’s Mill Bourbon about 45 minutes in, should make you giggle like a school girl as Cary Grant escapes harm via fabricated hijinx in the auction house. Seriously, NORTH BY NORTHWEST is one of the obvious go-to films for “learning”. I was shown the cornfield crop-duster sequence at age 18 in my freshman year story class at CalArts. The problem with freshmen is that you’re dealing with people who you ASSUME have seen certain films. At age 18, I’d heard of NORTH BY NORTHWEST, but never seen it. So the crop dusting sequence was marvelous to behold, even out of context, but still…it was out of context. And out of context, in a story class, is almost useless. Story happens in two ways: details, of course, which, with the crop-dusting sequence, still come across as marvelous…but the second way is “broad strokes”. Big, sweeping story elements. And these, my friends, are what establish context for something like the crop-dusting sequence.

Still, LOOK FOR DETAILS in NORTH BY NORTHWEST. The use of hands--human hands--and how they articulate. Grant and Eva Marie-Saint use them to great effect. Their first meeting, on the train, has them in the throws of passion: the cross cutting keeps the consistency of splayed fingers in hair, conveying a certain charm in the moment. Later, when they meet again, after Grant has been betrayed, Marie-Saint keeps her fingers splayed, but Grant, he holds his hands away from her, unable to touch his Judas. THIS is something that doesn’t show up in a script. THIS is NORTH BY NORTHWEST.

ALSO! Watch closely during the introduction of Van Dam. He accuses the unknowing Grant of “playing games”, yet Van Dam, that wily Sher Khan, enters in full light, crosses to a curtain, draws it closed, crosses to a lamp, turns it on and stand IN FRONT OF IT, back-lighting himself, then crosses yet again to light the room in full once more. Games, and control of how he’s perceived. This is a villain. This, too, is NORTH BY NORTHWEST. Charm: in the dialogue...the uses of lenses…the choices of shots.

It was a complete accident that I accented this flick with bourbon. That’s the happy film gods playing their role to a “t”, as Grant is forced most of a bottle, then requests it once more near the end of act 2. Bourbon. And Pappy Van Winkle is perfect for viewing this thing. The switch to Noah’s Mill was out a low supply of the Pappy’s. Try to keep to the good stuff.

ALSO! After the bad guys are on to Eva Marie-Saint (watch for two nice conventional camera tricks: focus, and a move, to a God’s eye view of the snakes in the grass), you’ll want to watch for an artful use of COLOR. It’s subtle, but as Grant climbs the outer wall of the mountain retreat, there’s a unique separation of warm and cool values: inner rooms warm, outer cool. Villains and prey inside…our hero, outside, in the cool.

And a train has never meant so much. Set up early in act 2. And the last shot says it all.

Details AND broad strokes. Watch the whole thing. The crop-dusting sequence is iconic, but it’s just the tip of the iceberg.
Posted by Scott Morse at 11:15 PM 5 comments: