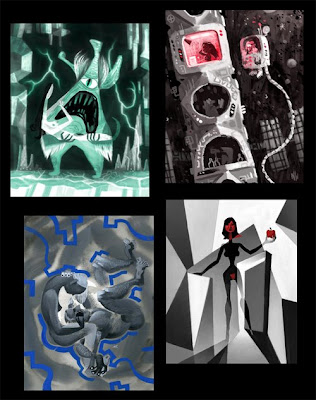 THE ANCIENT BOOK OF SEX AND SCIENCE is in production now...it's the follow-up to our incredibly successful ANCIENT BOOK OF MYTH AND WAR. Lou Romano, Don Shank, Nate Wragg, and me. We're shooting for next year's con to launch the book, but this year we'll have an exclusive set of 4 prints, limited to 50 signed and numbered sets, to launch the SEX AND SCIENCE concept. They're nice, on high quality fine art paper. This set will run $50 for all four images, images that won't run in the book, but will remain exclusive to this print set. What's shown here are two digital sketches (Romano and Wragg) and two finals (Shank and Morse). The set itself will be all final images, not shown. Hit me early for these exclusive pieces of art!
Posted by Scott Morse at 12:11 PM