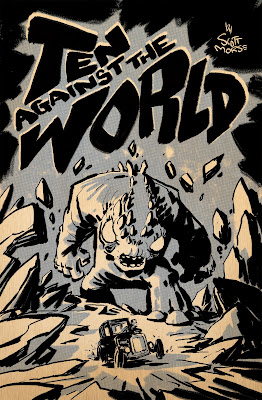 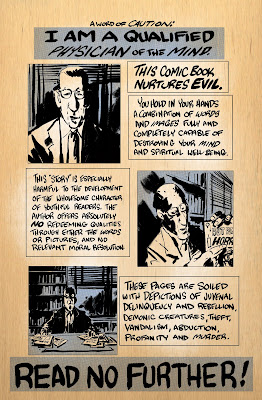 About time for an update, huh? Here's what's on the slate for this year, tentatively:

*THE ANCIENT BOOK OF SEX AND SCIENCE will hit just before San Diego Comic Con with a premiere art gala at NUCLEUS. This is the second of 4 planned ANCIENT BOOKS, featuring me, Lou Romano, Don Shank, and Nate Wragg. Coffee table goodness, we promise. Dates to be announced soon.

*TEN AGAINST THE WORLD is in the works, I'm pleased to officially announce. It's a 160 (or so) page Kirby/Toth-inspired monster comic set in the 1950's, lots of comic book fun I'm certain Wertham would love. There's a teaser above. It's being produced entirely in Photoshop on my Cintique, no pencils, just straight digital black, white, and blue, as an experiment in economics and speed. I'm about 40 pages in at this point. Keep your eyes and ears open for this one, as it may actually hit initially in online installments. Stay tuned.

*MAGIC PICKLE AND THE GARDEN OF EVIL and a fifth MAGIC PICKLE book will launch this year from Scholastic. The series is doing incredibly well, I'm happy to say. Buy copies for the kids in your life today!

*AFTERWORKS 3 is well under way with a hope to hit for SD as well. I'll have a short story, THE BUILD, about the building of my 1951 Ford truck. Lots of Pixar talent involved, of course, with a stunning cover by Lou Romano.

*There's a TIGER plush planned for San Diego, being designed by Anna Chambers.

*Convention appearance schedule to be posted soon, but look for me at Emerald City in Seattle the first weekend of April.

More soon! Thanks to everyone for an incredible 2008. Your support means the world.
Posted by Scott Morse at 10:53 AM

Wow! What a line-up to begin the year with! Congratulations!
And the Ten against the World Cover is FAB! Happy New Year, full of all the best!

WOW! I'm really stoked for TEN AGAINST THE WORLD! Bring it on!

everything looks soooo awesome (as it always does)!!

Awwww... anything coming from you is something to eagerly pick up, but, I've been eagerly awaiting Lyrical Whales since I first read about it in '07. Looks like you've got more than enough goodness on your plate though.

"Juvenile" rather than "juvenal", but then there's no spellcheck for hand lettering. Good to see you do hand lettering by the way. There's nothing at all wrong with your hand lettering and I think it suits the character of your work. Computer lettering doesn't have the same feel.

My name is Jennifer and as crazy as it may sound, I have a website about pickles, though I don't sell pickles. I just discuss things pickled or pickled-things. Alas, I have found your comic about the Magic Pickle of great interest and would love to discuss the possibility of doing an interview with you? Please check out, www.thepickleclub.com to find out more about the site. Hope you will find it interesting enough to correspond back. : ) Also, is it true you've got another edition of Magic Pickle coming out this year? Let's talk pickles! All my best, Jennifer

Ten Against the World looks amazing, I can't wait!

I've sent a couple of e-mails to what I thought was your address @charter.net inviting you to participate in an event 4/18/09. Since I haven't heard from you I'm resorting to this blog. Please contact me at steve.cohen@berkeley.edu

Hey Scott. This is Courtney Lewis. I am your second cousin, my mom is Lori Lewis. She is wanting me to get a hold of you. Can you please message me back? Thanks!

Hey Scott. My name is Courtney Lewis and my mother is Lori. She is wanting me to contact you. She is just wondering how life is treating you now. I saw the books and everything that you have written! Congrats on those! They look very interesting.