THE ANCIENT BOOK OF MYTH AND WAR 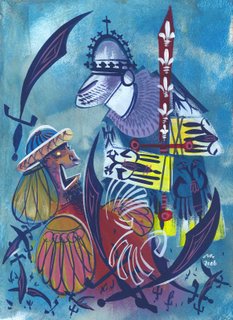 Yeah, I know you've seen this image before, but now I can tell you more about where it's going:

Early next year (we're shooting for February) Red Window will release THE ANCIENT BOOK OF MYTH AND WAR. This is a hardcover art book featuring work by me and some other Pixar pals, Lou Romano, Don Shank, Nate Wragg, and Ricky Nierva. It's going to be INSANE how cool this book will be, if all goes according to plan. Anyhow, watch these blogs for hints of what's to come:

Hey a new art book for my greedy eyes!

May everything go well and easy for the book.

BOOM unto ye and yours man! i'll seek to find said hardback when moons pass over us for many fortnights' time - i'm victory - nice painting dude!

I've really bee enjoying your work, and I look forward to this book. Thanks, too for the links to your buds. Seeing you folks' work is both eye-opening and inspiring.